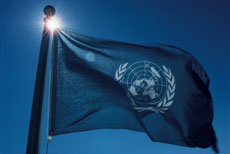 The United Nations Climate Change Conference, COP21 or CMP11 will be held in Paris, France in 2015. The international climate conference will be held at the Le Bourget site from 30 November to 11 December 2015.[1] This will be the 21st yearly session of the Conference of the Parties (COP 21) to the 1992 United Nations Framework Convention on Climate Change (UNFCCC) and the 11th session of the Meeting of the Parties (CMP 11) to the 1997 Kyoto Protocol.[2] The conference objective is to achieve a legally binding and universal agreement on climate, from all the nations of the world. Leadership of the negotiations is yet to be determined.(http://en.wikipedia.org/wiki/2015_United_Nations_Climate_Change_Conference, Retrieved 2015)
At the initiative of the European Union and the most vulnerable developing nations, taken at the Durban climate conference in December 2011, UN negotiations are under way to develop a new international climate change agreement that will cover all countries.


The new agreement will be adopted in 2015, at the Paris climate conference, and implemented from 2020. It will take the form of a protocol, another legal instrument or 'an agreed outcome with legal force', and will be applicable to all Parties. It is being negotiated through a process known as the Durban Platform for Enhanced Action.

From patchwork to single global regimeThe 2015 agreement will have to bring together the current patchwork of binding and non-binding arrangements under the UN climate convention into a single comprehensive regime.

The EU, a few other European countries and Australia have agreed to join a legally binding second period of the Kyoto Protocol which runs until 2020, while over 70 other countries – both developed and developing - have made different types of non-binding commitments to reduce, or limit the growth in, their greenhouse gas emissions.

Milestones up to 2015Elements of a draft negotiating text are to be ready in time for the Lima climate conference in December 2014 so that a full negotiating text is available before May 2015.

The Warsaw climate conference in November 2013 sent a strong signal that all countries need to start doing their 'homework' to prepare their contributions to reducing or limiting emissions under the 2015 agreement.

All Parties agreed to put forward their intended contributions well in advance of the Paris conference, and by the first quarter of 2015 if they are ready to do so.

Based on a proposal by the European Commission, the EU is discussing setting itself a 2030 emissions reduction target of 40% below 1990 levels. These discussions are taking place in the context of the development of a comprehensive climate and energy policy framework for 2030.

Public consultationIn March 2013 the European Commission published a Consultative Communication to launch a public debate on how best to design the 2015 agreement.

The paper raised a number of key questions and invited the views of stakeholders, Member States and EU institutions. It also made clear that global action taken before 2020 will be crucial to setting policies on the right path for the agreement to succeed.

The three-month online consultation included a stakeholder conference. The responses received will feed into the development of the EU's negotiating position.